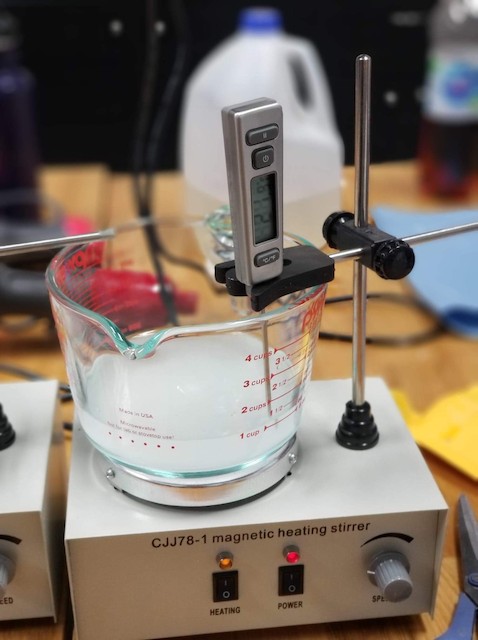 In the September Q&A, Charlette asked, Sorry, but have another question. With our recent use of so many different cold process emulsifiers–although I know we all use good production practices–are we giving up some preservation and ‘kill the beasties’ benefits which the heat-and hold process gives us? Don’t get me wrong! I’m loving the ease of cold process formulas, but sometimes I wonder about (really, have nightmares!) if those beasties are compromising our products!

Never ever ever apologize for asking a question! I’m always about the questions as I find it’s a great way to learn. Follow your curiosity, ask away! 🙂

I’m with you on this! I find it not heating and holding to be such a strange thing when I’m in the workshop, but I can assure you that in all the years I’ve been making cold emulsions with ingredients like Aristoflex AVC, Sucragel AOF, Sepiplus 400, and so on, I’ve never had an issue with contamination while following good manufacturing processes, starting with distilled water, and using a broad spectrum preservative at the upper end of the suggested usage rate. 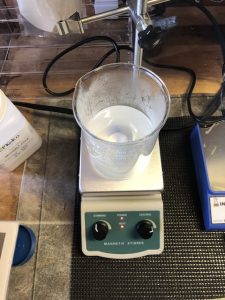 Heating and holding the water phase of a lotion isn’t really doing much for killing gross things that can contaminate our products.

I know you can find me saying this all over the blog, but I was wrong, and I’m working on updating it all – which you can see in this post about basic lotion making instructions – so we aren’t taking a huge risk by cold processing.

I wrote more about this topic in this post from 2016.

When using cold emulsifiers, make sure you’re following good manufacturing processes. Clean your equipment with an alcohol spray and use distilled water or reverse osmosis water. Don’t use mineral or spring water as we don’t need those metals and minerals in a product.

Use a good, broad spectrum preservative with ingredients that can boost the efficacy. Including a chelating ingredient, like sodium phytate or EDTA at 0.2%, can reduce contamination due to oxidation by metals. You can add ingredients that’ll boost preservatives, like Ethylhexylglycerin or other humectants.

Check out the post on hurdle technology to learn more about other good manufacturing processes!

It’s hard for me to shake the habit of heating and holding when using these cold emulsifiers, but I’m starting to be okay with it as I’ve tried so many with such great success! Thank you for asking this question!

AN ASIDE ON ETHOXYLATED EMULSIFIERS – HEAT & HOLD AND PHASE INVERSION

Lest this conversation lead to many many many links to Formula Botanica’s post – 6 Reasons why the Heat and Hold Method is a Myth – about not having to heat and hold lotions, please note that article is about non-ethoxylated emulsifiers, those that are considered naturally compliant, and doesn’t apply to those containing ethoxylated ingredients, like Polawax, emulsifying wax NF, Simulsol 165, those with ingredients like ceteareth, polysorbate, PEG esters, and more.

Having said that, I still suggest heating and holding non-ethoxylated emulsifiers like Olivem 1000, Montanov 68, or Simulgreen 18-2 for the reasons that will become clear as you read the rest of this post…

We want to heat and hold these emulsifiers because we need to get them to the phase inversion temperature “above which an ethoxylated surfactant becomes insoluble in water.” (Reference)

Umm, does it look like they copied two paragraphs from my post on phase inversion from 2009 in their post, in the part on that topic? Huh, that’s interesting…

Here’s what I wrote way back when…How exactly does phase inversion work? Most of the emulsifiers we use are ethoxylated fatty materials. The hydrogen bonding between the ethoxylated molecules and the water is what helps with the emulsion. When they are heated two things happen: their HLB changes from about 12 to about 5, which means they are more suitable for water-in-oil emulsions, and their ability to form these hydrogen bonds with water decreases. So they’re really acting as water-in-oil emulsifiers when heated. As the lotion cools, the HLB of these emulsifiers starts to increase back to the proper HLB value and their ability to hydrogen bond with water increases. The lotion switches from being a water-in-oil emulsion to being an oil-in-water emulsion.

It is well-known that as temperature is increased, ethoxylated surfactants become less water-soluble. This somewhat surprising observation is easily explained by considering that, as the temperature increases, the molecules exhibit more movement/​vibration. Thus, hydrogen bonding is inhibited, the ethoxylate loses its water solubility, and cloudiness results.

As you can see, heating our oil phase is pretty important stuff when we’re working with these ethoxylated emulsifiers. But why are we holding it? There are a few different reasons… 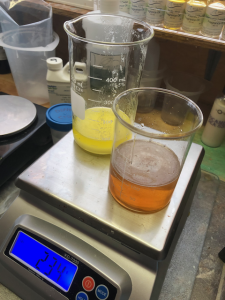 We want to ensure everything is heated higher than its melting point. Let’s say you’re using stearic acid in a lotion, which has a melting point of 69˚C. If you heat the oil phase to 70˚C, then pull it off the heat right away, you’ll have bits in there that aren’t fully melted or fully up to temperature, and this can create those nasty grains we all hate so much. If we hold it, we can be assured that the entire batch has reached the right temperature.

As a note, our butters all have stearic acid in them, which means that although the melting point of the butter might be 39˚C, like cocoa butter, not all the stearic acid may be melted at that temperature. Again, this is why heating a butter like shea butter only to melting can result in grains! This is why I recommend heating and holding

As well, if we heat something to 70˚C, it takes longer to cool to room temperature than something heated to 50˚C, which can be quite important when we have ingredients that need to be added at higher than cool down phase – say 45˚C – but below heated phase – let’s say 70˚C. This gives us time to add things that might need to be 60˚C without the emulsion cooling too fast that we miss that window.

It’s harder to mix products when they’re cold and thickened, so having more time to mix is pretty darned important when we’re adding ingredients like preservatives that need to be properly incorporated.

This is also why we never mix with a whisk or something else by hand in the cool down phase. Mixers, blenders, and other stirrers are vital during all the phases of lotion making.

If you add a bunch of room temperature water to hot oil, it’ll cool down really quickly, which isn’t a good idea because we aren’t reaching that phase inversion temperature and we might be losing out on time we need to do certain things, like adding ingredients or mixing for a specific period of time. If you’re supposed to mix for five minutes before adding the cool down phase, and you only have 3 minutes between the two phases, you could run into problems with solubility or viscosity.

Plus, there are things in the heated water phase that need to be heated, like allantoin and other powders.

This is why you need to buy and use a thermometer in all your products. It isn’t enough to say to heat everything until melted or until liquid – we need to know the exact temperature to ensure we’re doing everything we can to create a wonderfully stable lotion!

Just a few thoughts from me! I’d like to hear what you think!

Thanks to JennaTheFirst for the great photo from the classes at Windy Point Soap Making Supplies, September 2019.

Not heating and holding with cold emulsifiers?

Other cool things to read!

This presentation on emulsions and emulsion stability is really interesting!

This post, which is really complicated, but just take a look at the pictures as they’re interesting

Techniques and methods to study functional characteristics of emulsion systems